Our office is now open for scheduled in person meetings as we continue to take the proper precautions for COVID-19.

Solving Legal Issues With Experience
Call for a free consultation

What Am I Entitled To in a Divorce? 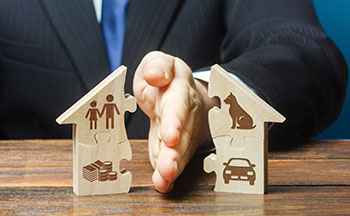 Divorce rates nationwide have been on a decade-long decline, according to data compiled by the Centers for Disease Control and Prevention (CDC). The rate in Kansas went from 3.6 divorces per thousand residents in 2008 to 2.3 per thousand in 2018. In neighboring Missouri, the rate fell from 3.7 to 3.0 per thousand in the same period.

No matter the statistics or cause, divorce is an emotionally — and often financially — trying time. Divorce can be even more challenging and complex when there are children and property involved.

If you’re considering divorce, have been served papers, or have already begun the process, you no doubt have many questions, especially regarding the division of assets and how that affects your future.

If you’re in the Overland Park or Johnson County areas of Kansas, or even in the neighboring state of Missouri, call me at Rundberg Law, LLC. I am licensed in both states and will answer all of your questions. I will guide you throughout the divorce process to help you get a fair division of assets.

Both Kansas and Missouri are “no-fault” divorce states. A divorce can be granted based on an assertion by either or both spouses that the union is incompatible and irretrievably broken. Both states are equitable distribution states, which means the property will be divided fairly, but not necessarily equally. Each spouse is not automatically entitled to fifty percent of the marital property. The ultimate distribution, if decided in court, will be based upon various factors.

The Source of Funds Rule

In either state, if the separate property becomes “commingled,” it can cease being non-marital and become marital, in whole or in part. This typically happens when marital funds are used to improve, maintain, contribute to, or pay off debt on separate property.

When deciding how to distribute the assets of your marriage equitably, judges in either state will rely on certain commonly held considerations. To determine what is considered equitable distribution, judges will normally consider the following:

If the spouses can agree upon what they consider to be an equitable distribution of assets, they can present this to the court for consideration in what is known as an “uncontested” divorce. The big consideration here is whether the spouses can put emotions and past feelings aside long enough to reach an agreement.

The best route to an uncontested divorce is through the help of a divorce attorney who can advise you about what division of assets and liabilities is best for you. Arguing matters in court will be costly in both time and money, to say nothing about the continued stress. There are no guarantees for how a judge will decide how assets and liabilities will be divided.

Divorce is not something you want to attempt on your own. You will be much better off if you have the guidance and counsel of an experienced divorce attorney. Attorney Ron Rundberg will help you assess your assets and liabilities in an effort to ensure you're not taken advantage of. Emotions often run high in a divorce case and can make it difficult for you to determine what division is appropriate for your situation.

If you’re facing any stage of divorce, merely considering it, or you've been served notice by your spouse and have court proceedings that are pending — contact me at Rundberg Law, LLC. I am located in Overland Park, Kansas, but am licensed to practice in both Kansas and Missouri. I have helped countless others in your position. Call for a free consultation and let’s work toward an equitable solution for you.