Due to COVID-19 our office is closed for in person meetings. We are conducting business via phone call or video chat and are still taking new clients.

Call for a free consultation 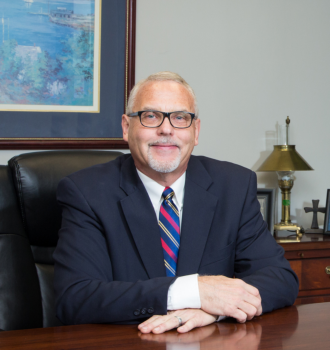 Since 2014, judges and other attorneys have designated Mr. Rundberg to be AV Preeminent™ Peer Review Rated by Martindale-Hubbell®. This means that he has been recognized for having the “highest level of professional excellence” for both legal ability and ethical standards. Since 2016, he has also been selected to Missouri and Kansas Super Lawyers. Only 5% of attorneys in Missouri and Kansas receive this distinction.

My goal is to help families get through tough situations and find peaceful solutions.

Mr. Rundberg has personal experience in dealing with the impact of divorce. He understands what his clients are going through during their divorce. He and his wife have been married for over 22 years and have a blended family of five adult children. He and his wife are facilitators of a Divorce Care class, and he also is a Sunday school class director.

Ron Rundberg is licensed in both Kansas and Missouri. In Kansas, he serves Johnson, Douglas, Wyandotte, Miami, and Franklin Counties. In Missouri, he serves Jackson, Cass, and Clay Counties.